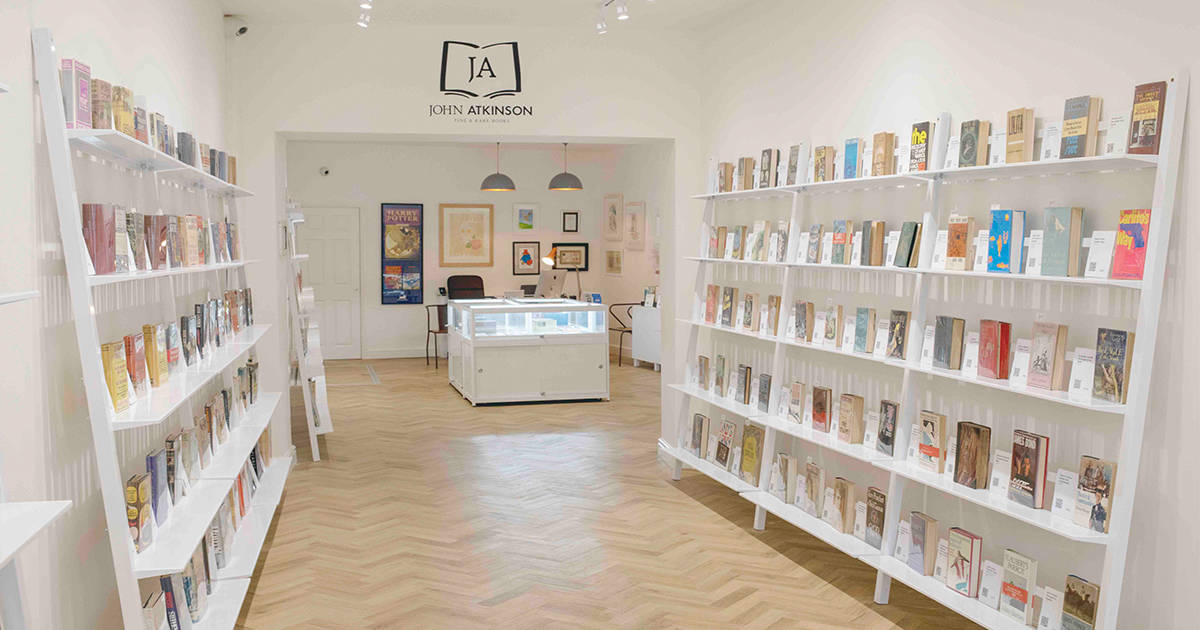 Rare books are can be even more valuable with a meaningful inscription from the author and John Atkinson Books has seen some truly beautiful examples recently.

One collection has made the local and national news:

The Casino Royale has an inscription to Lisl Popper, one of Ian Fleming’s lovers and someone very close to him throughout his life. it reads, ‘To Lisl, Despite whose loving care this book was written, Ian.’

Goldfinger has an inscription to Henry Cotton, the leading British player of his generation and a member of Royal St George’s Gold Club with Fleming. ‘To Henry Cotton, who may be amused by pp. 92-113, Ian Fleming.’ This refers to a game of golf between James Bond and Auric Goldfinger at Royal St Mark’s Golf Course. Royal St Mark’s was a fictional course, but was based on Royal St George’s Golf Course at Sandwich in Kent (the club which Henry Cotton and Ian Fleming belonged to.)

Thunderball is inscribed: ‘To Wing Commander Dobson for his very kind help, From Ian Fleming’. Wing Commander Peter Dobson, DSO DFC AFC was introduced to Ian Fleming by Joan Saunders (from the Writers and Speakers Research Agency) and he gave advice on aviation, planes and, especially, Avro Vulcan Bombers for the Thunderbolt novel.

From Russia with Love
“To Una, Who will at last get to the end! from Ian Fleming.”

Una Trueblood was Fleming’s secretary at KemsleyPress. She typed up the television treatment that Fleming later developed into the novel Doctor No and, like many of Fleming’s acquaintances, she gives her name to a character in the novel: Mary Trueblood, secretary to the MI6 station in Jamaica. In the story, Mary Trueblood was a former Chief Officer WRNS and secretary to John Strangways, the head of the British Secret Service’s Caribbean station based in Jamaica. After assassinating Strangways for prying into Dr. Julius No’s business, his killers proceed to the station and murder Trueblood during her scheduled contact with London.

Both she and Strangways are placed in a weighted coffin and dumped in the Mona Reservoir; sinking into a fifty-fathom grave as the station and its records burn to the ground. After an official investigation is launched into their disappearance, the head of the Secret Service, M, noting her good looks, floats the idea that they might have run off together.

Una Trueblood, a real-life Miss Moneypenny, worked for over ten years as Fleming’s secretary at The Sunday Times. She was known as ‘a demon typist’ and typed the manuscripts of Fleming’s Bond novels upon his return from Jamaica each year. Trueblood was mentioned in Fleming’s ‘Thrilling Cities’ and was known by Fleming for her professionalism and fastidiousness. Una once spoke of her boss’s move into literature: “He always said he only wrote Casino Royale, the first Bond book, because he was on the plane to Jamaica and he read such a bad, boring thriller that he thought he could do better himself.”

Inscribed copies of Bond books are rare, but inscribed copies which connect the inscribee to a character within the Bond literature are exceptionally scarce.

You can find out more about which cookies we are using or switch them off in settings.

This website uses cookies so that we can provide you with the best user experience possible. Cookie information is stored in your browser and performs functions such as recognising you when you return to our website and helping our team to understand which sections of the website you find most interesting and useful.

Strictly Necessary Cookie should be enabled at all times so that we can save your preferences for cookie settings.

If you disable this cookie, we will not be able to save your preferences. This means that every time you visit this website you will need to enable or disable cookies again.